Lighting in the Workplace: Wellness, Productivity and Sustainability

Lighting in the workplace is one of the most critical aspects of Health and Safety legislation, as the empirical evidence suggests it plays a pivotal role in the well-being of employees. While that aspect of lighting is indeed important, facility managers are also beginning to see the documented success of turning to sustainable solutions for facility lighting needs.

As the Health and Safety Executive (HSE 1987) points out, there are many reasons why lighting is an important consideration in the workplace. As facility managers know, the workplace is hazard-laden, and the faster it is to spot a hazard, the easier it is to avoid.

On top of this, research shows that poor lighting can cause symptoms like eye strain, migraines, headaches, lethargy and poor concentration. Not exactly the kind of environment a manager wants to be responsible for.

Of course, one must also consider the cost implications of poor lighting. Time off work due to accidents or the above symptoms results in less productivity, increased absenteeism and reduced efficiency. Another consideration to cost is the current pricing of the traditional lighting models, which in comparison to new alternatives, such as LED lighting, are rather exorbitant.

Originally considered an annoying new technology with little benefits, LED lighting is fast taking the facilities maintenance world by storm. Why? The answer is simple. It has a long-life and is lower on energy consumption. It’s pretty much a no-brainer.

LED lighting is also far more diverse than when it hit the market twenty years ago and has the ability to deliver a plethora of benefits. This includes meeting sustainability targets which are increasingly important in a world that is being pushed to its limits by Man’s drive toward innovation.

What is the difference between LED and traditional lighting?

The reason LED lighting is becoming so popular is the nature of its light direction, as evinced by this visual representation. 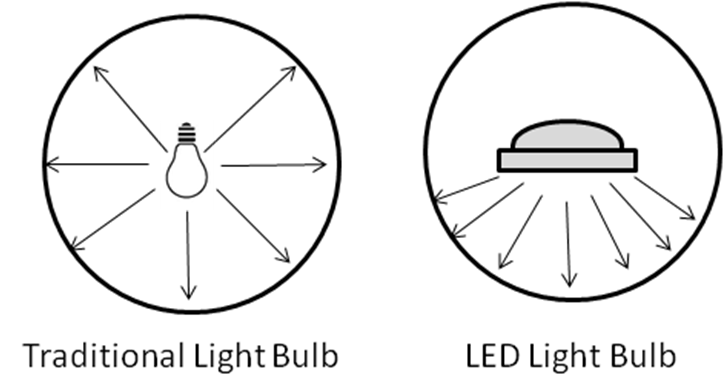 Where a traditional light bulb glows in a 360 degree radius, the LED bulb focuses its lighting direction – removing all loss of trapped light. In the former traditional bulb, covers and other factors cause an average loss of 40% of light. The most an LED loses due to protective coverings or other factors is 25% – and that is only in the case of extreme coverings.

Another measurement of effectiveness is the lumen depreciation on different light sources. In a High Pressure Sodium Metal Halide (HID) light source which depreciates at 20%, the source will be effective for around 24 000 hours – just under 3 years. An HID light depreciating at 50% will last between 6 000 of 10 000 hours – around a year.

What are the cost implications?

But let’s begin with the savings. Switching to LED, or replacing older systems with LED technology, can reduce a company’s energy usage by up to 70%. That’s not a typo. We’re not talking in increments here. Saving 70% of your energy output means saving 70% of your cost. A good example here is The Forgital Group’s site in Italy, who recouped the cost of upgrading to LED in one year through their savings. Their consumption decreased by 1.3 GWh, which should give you an idea of just how effective the change can be.

It gets better still. In a recent study on health, wellbeing and productivity in offices, done by the World Green Building Council, it was found that LED lighting increases productivity while lowering or equalling energy costs. The study concludes that all major lighting manufacturers are investing in an LED future. Amazingly, the lead LED luminaires manufacturers are also incorporating future-proofing elements, so that the luminaires can be upgraded regularly as new technology comes out. This, in turn, shows a level of foresight on the issue of automated technology in facilities – fast becoming another norm.

What’s the crux of it?

LED lighting is paving the way to the future with its low-energy glow. If you aren’t already looking into the change, you should be, or you’ll soon find yourself waging a war with exorbitant lighting costs, disgruntled employees – and Mother Earth herself. Go green, go cheap, go productive.

Go to top
We use cookies to ensure that we give you the best experience on our website. If you continue to use this site we will assume that you are happy with it.OkNoPrivacy policy